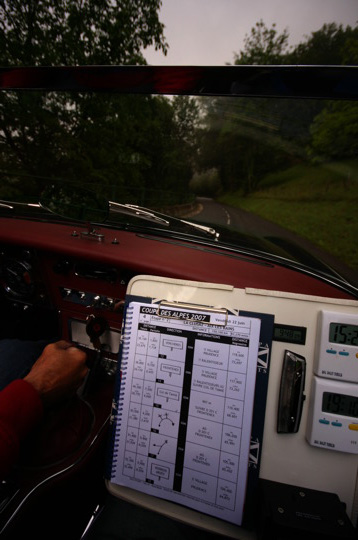 In this section we would like to provide you with everything you need to know to understand how a roadbook works ...

A roadbook is nothing more than a detailed description of the road in the form of a table. The printout of the roadbook then makes it possible to travel "in real" the route, without a map and even without knowing the route.

Roadbooks are used in all rallies. A roadbook is arranged in the form of a table. Each line describes a significant point on the route, for example, a crossroads, a fork, a curiosity to see or a dangerous point (often indicated in rallies).

The mileage, which consists of the full distance traveled to this line (this image) at that time and the partial distance, i.e. the distance from the previous image. In addition, the number of this image is indicated as part of the full roadbook.
A graphical representation of the situation at this location indicating the direction of traffic to follow.
Optionally, text that can contain other information.

The organizer will make his road book using a variety of rating systems, the main ones of which I will try to review.

The road book defines the route to follow, using either:

a succession of diagrams representing the different crossroads: they are called the "arrows", whether they are metered or not.
a succession of literary notes
maps or the route is highlighted (Maps drawn)

For the "Expert" category only:
- German arrow, also called "fishbone"
- maps or the navigator must trace the route according to a list of waypoints. (Tracing cards)

Whatever the style of note, the competitors will have to prove that they have followed the required route thanks to the passage control (CP). These can be human controls, in which case the browser hands over its route map to the latter, which will stamp the next free box.
The CP can also be "non-human", and will therefore be a small sign placed by the organizer on the side of the road (Some per sector). The navigator will write the sign symbol on his waymap himself. From time to time, it can be a stamp or punch that asks to get out of the car.
In general, there are some CPs on each sector. The pilot (the only one to watch the road on a permanent basis, I dare to hope!) Must be very attentive to the CPs, because forgetting one can "cost" the equivalent of 3 to 10 minutes late. So, if you think you've forgotten one, it may be useful to turn around.

For beginners, the first two difficulties are:

By convention, the organizer never mentions the roads prohibited for the rally such as local traffic, a prohibited direction, a supermarket entrance, a highway climb (etc ...). So, when we cross a road that we could not take anyway, we must pretend that it does not exist because it will not be repeated on the notes.

The smallest complicated crossroads can be circumvented via a multitude of close notes, these are the decomposed ones.
The pinnacle of the genre is undoubtedly a vulgar ront-point (RP). Imagine a RP where six routes converge, and where the organizer wants you to take the third exit. Well, entry to the PR is not mentioned in the road book since there is no other choice than to get involved (see previous difficulty). Then, two separate notes will ask to "ignore a straight line", which forces you to stay on the roundabout. Finally, a note disturbing a "Quitter Droit" will ask you to leave the roundabout. And so here are 3 unfortunate notes to make on 10 meters at most: hello vigilance! 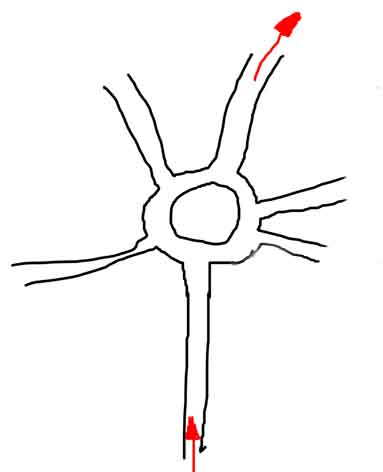 Before continuing, let's see a small example. First of all, a map clearly indicates the route to follow between the starting point A and the arrival at CH2. I added a road prohibited to traffic on the map, to show that no rating system will take it again since for competitors, it does not exist! 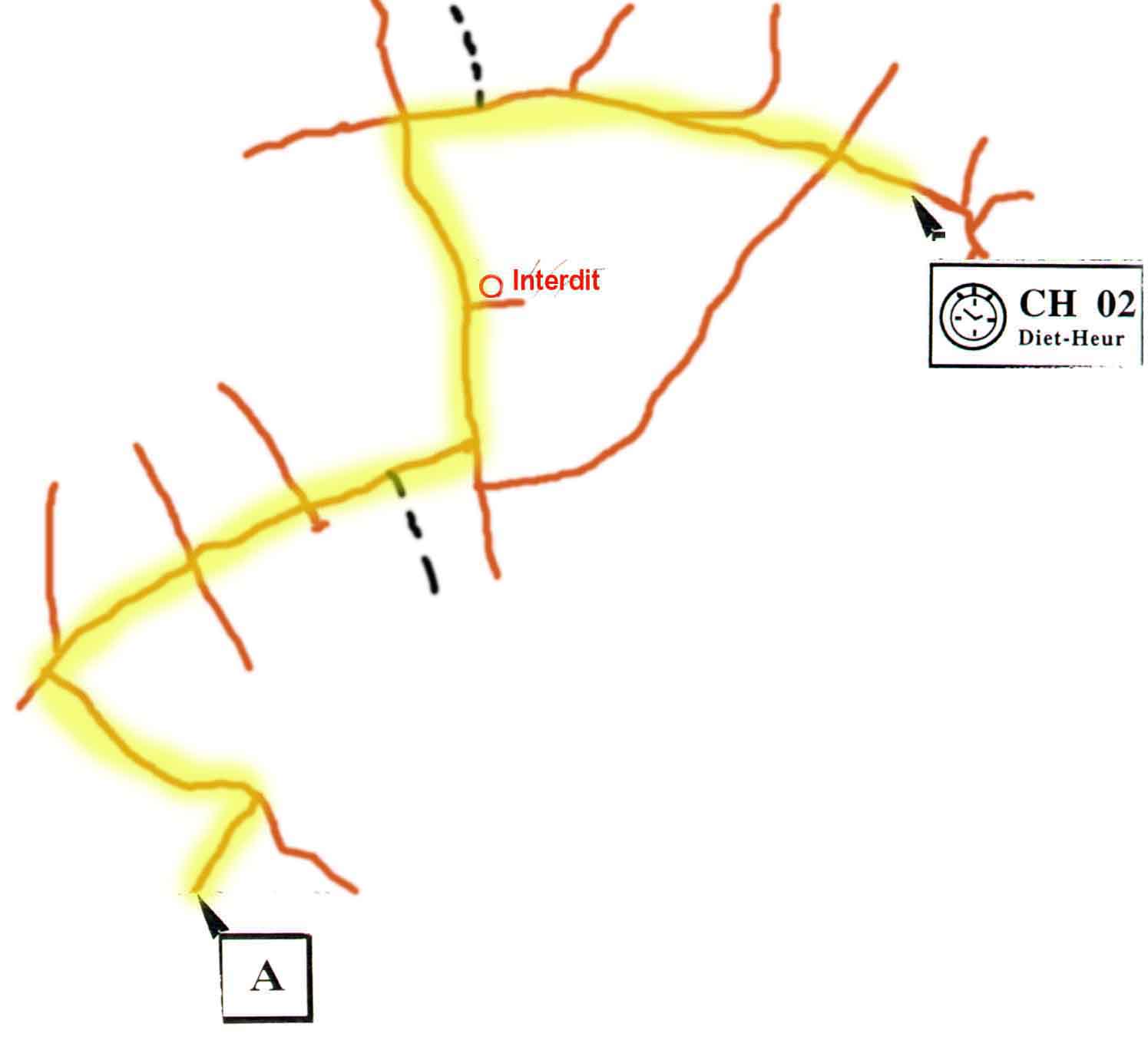 The same route will now be developed in 5 different forms (non-meter arrow, straight arrow, meter arrow, notes and German arrow), and you will quickly understand the subtleties of these. 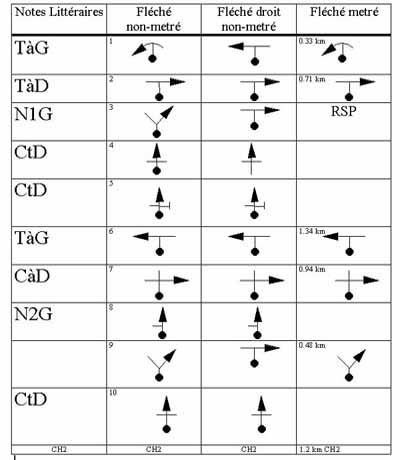 Let us now detail each of these note systems:

The simplest of systems, because we know exactly how far away the next note will be.

It is a succession of small "Tulips" diagrams where the goal is to cross the crossroads from the "Boule" towards the "Flèche".

In this system, the organizer does not mention all the crossroads, and can be content to indicate only those where it is necessary to change direction.

The curvature of the roads and the relative angles are reproduced on the diagram, which allows the navigator to announce for example a hairpin or an open turn.

In the following example (12H Huy 1999), we can see that the total and intermediate mileage appear. Pay no attention to the times in the instructions column, we will see what to do later. 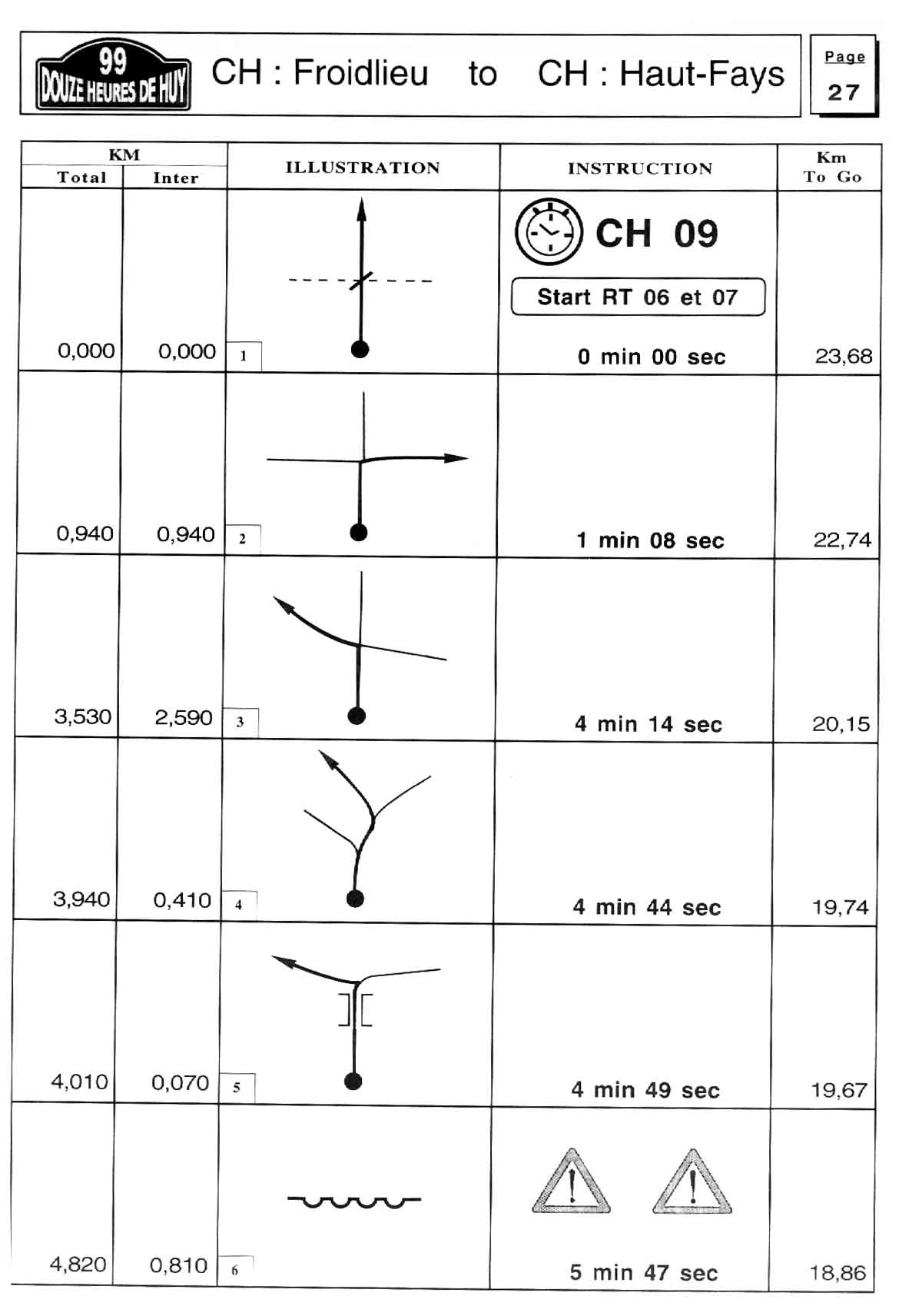 Already much more full-bodied because the browser has no idea of ​​the distance to cover before crossing the next note.
The organizer is obliged to mention absolutely all the crossroads with non-prohibited roads.

Here is an example: 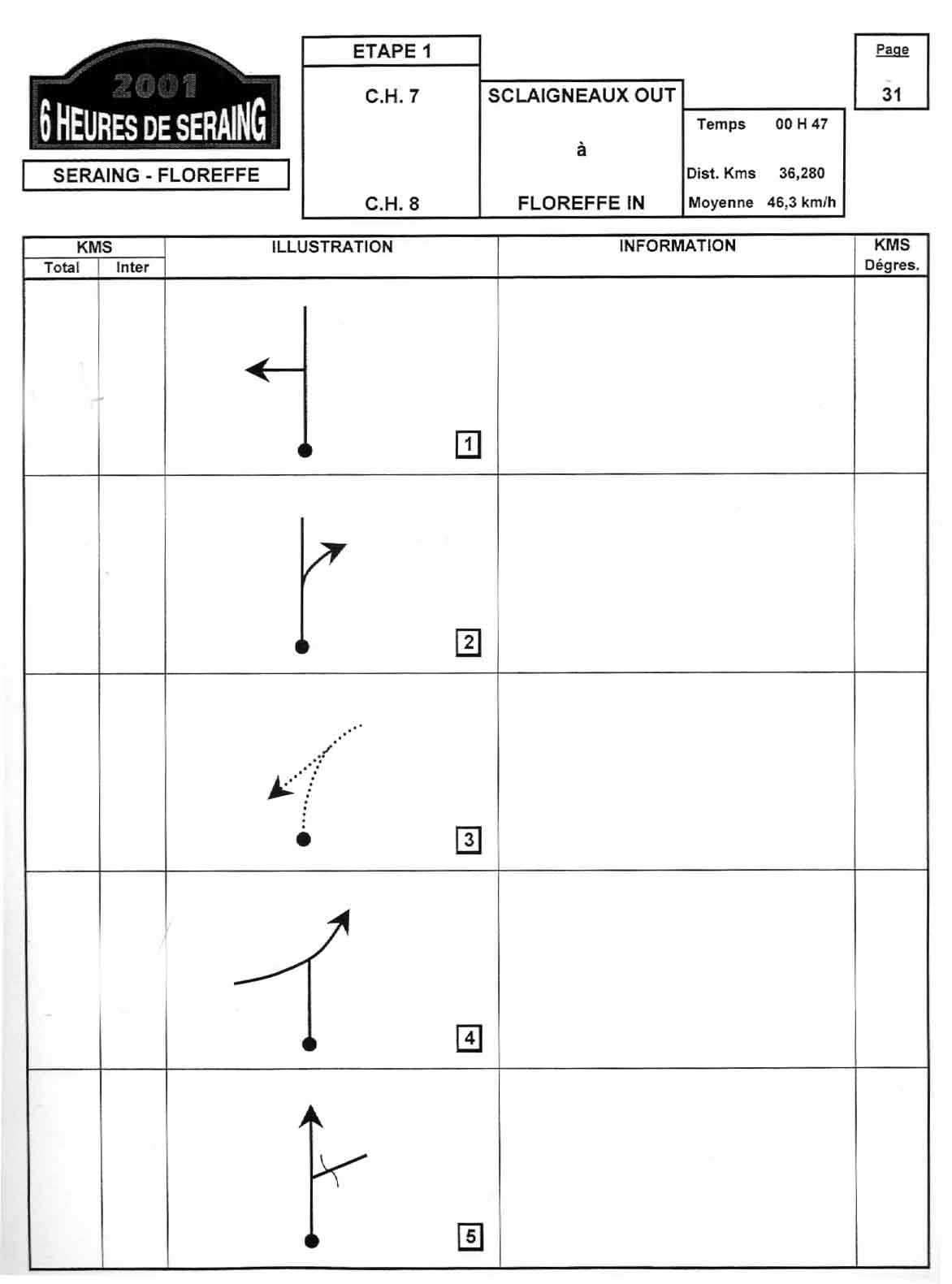 In this system, the curvatures of the roads no longer appear, nor the relative angles of the roads. In the diagrams, all the crossroads seem to be perpendicular, while the reality may be very different!

Be careful, because it becomes more difficult to realize that you are on the wrong road ...

Here is an example (straight arrow not metered, there is also the right-meter combination).

In the diagrams, the broken lines represent dirt roads, which must sometimes be taken as requested in note 9. 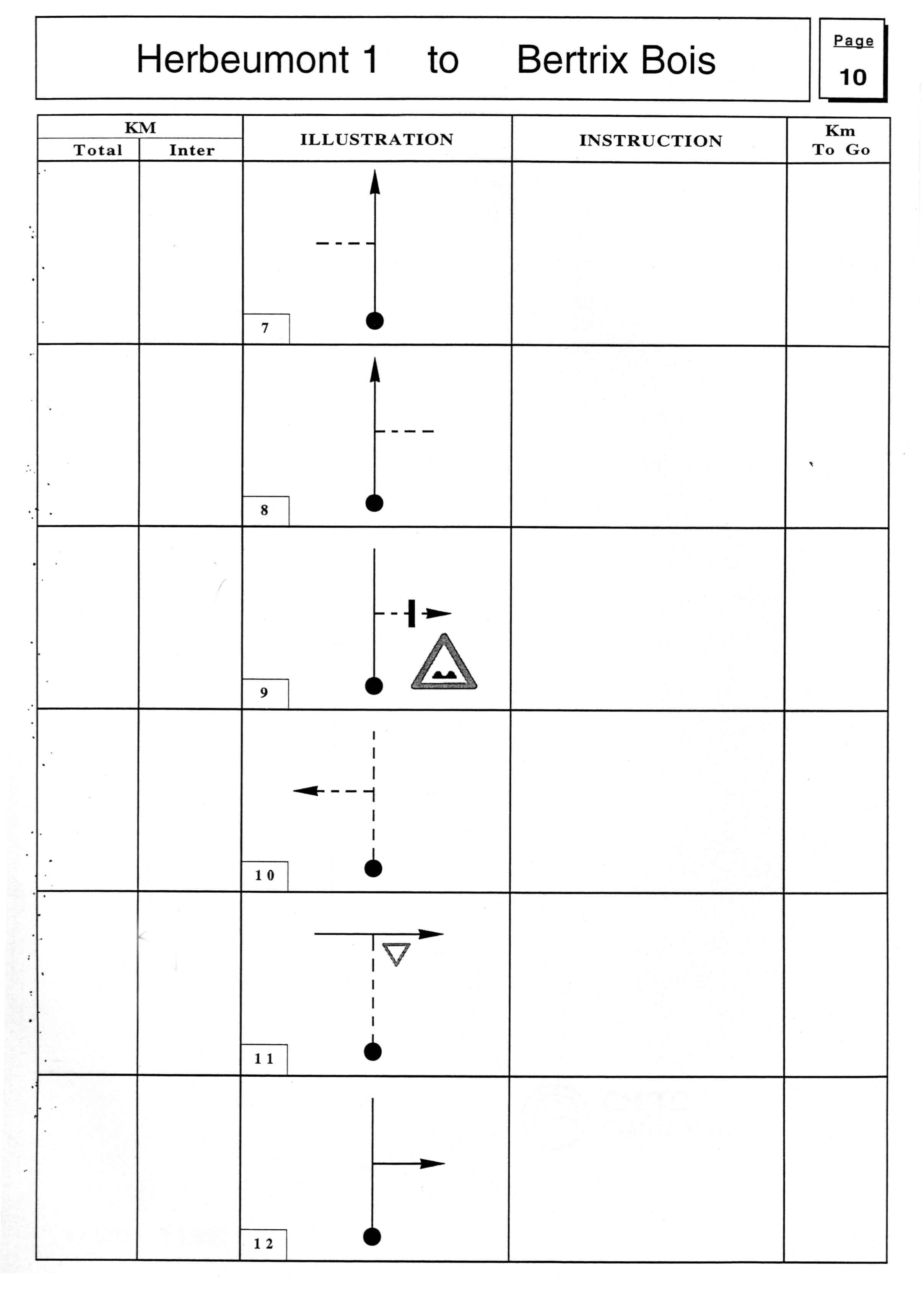 The simplest variant is the so-called "traced" map, where the route is highlighted (color or arrows lining the road), as seen at the beginning of the chapter.

Do not trust the apparent simplicity, because the maps are not updated often, some routes on the map no longer exist, and new routes do not appear on the map! It would be too easy.

Also, always beware of decomposed where a magnifying glass is sometimes necessary

Literary notes
This system comes closest to the vocabulary used by the browser to denote the path to follow.
It uses a system of abbreviations, the meaning of which is as follows:

CàD: crossroad on the right
CàG: crossroads on the left
CtD: straight crossroads 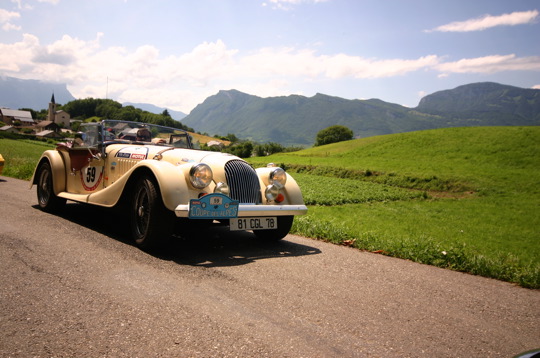 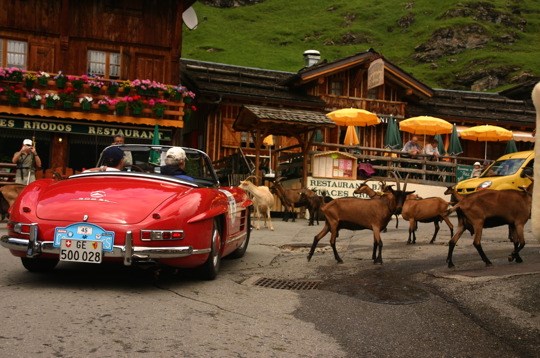